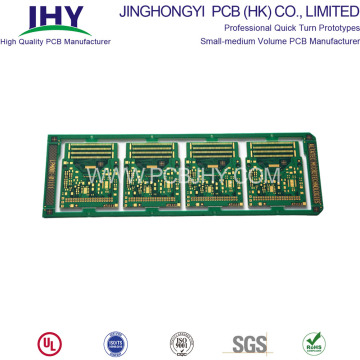 Jinghongyi PCB provides you with 10 layers of high-precision impedance control PCB manufacturing services. Here you can get real-time quotations, our production process, PCB board material, delivery cycle and so on.

You may have the same questions:

Q: Can you make impedance control PCB? Can blind hole PCB be produced?
A: Yes, since the company was founded, we have produced numerous PCBs with different processes, including simple standard PCB, difficulty PCB, high-frequency PCB, impedance control PCB, BGA PCB, HDI PCB, thick copper PCB, etc. Experienced engineers and skilled technicians can ensure that your PCB can be delivered to you with high quality.

Q: How do you guarantee the quality of your products
A: The whole process quality monitoring, AOI and flying needle double test, to ensure product quality!

Why the lower the impedance, the better? Because PCB should consider the electronic components, electrical conductivity, and signal transmission performance. On the other hand, in the production process of 10 layer PCB, copper deposition, tin plating (or chemical plating, or hot spray tin), connector soldering and other links as well as the materials used in this link must ensure the bottom resistivity, so as to ensure that the overall impedance of the circuit board is low enough to meet the product quality requirements, or the circuit board will not operate normally.

With the increasing speed of PCB signal switching, PCB designers need to understand and control the impedance of PCB trace. Corresponding to the short signal transmission time and high clock rate of modern digital circuit, PCB trace is no longer a simple connection, but a transmission line.


If there is no impedance control, it will cause considerable signal reflection and signal distortion, leading to design failure. Common signals, such as PCI bus, PCI-E bus, USB, Ethernet, DDR memory, LVDS signal, etc., all need impedance control. Finally, impedance control needs to be realized through PCB design, which also puts forward higher requirements for the PCB manufacturing process. After communication with the PCB manufacturer or PCB supplier, and combined with the use of EDA software, the impedance of wiring is controlled according to the requirements of signal integrity.

The impedance value can be obtained by calculation in different ways.

What is Impedance Control in PCB

In order to improve the transmission rate, we must increase the frequency. If the circuit itself is etched, laminated thickness, wire width, and other different factors, it will cause the impedance value change and the signal distortion. Therefore, the impedance value of the conductor on the high-speed circuit board should be controlled within a certain range, which is called "impedance control".

Characteristic impedance: in practice, the PCB transmission line is usually composed of one conductor trace, one or more reference layers and insulating materials. Traces and layers form the control impedance. PCB will often adopt a multi-layer structure, and the control impedance can also be constructed in various ways. However, regardless of the method used, the impedance value will be determined by its physical structure and the electronic characteristics of the insulating material:


The characteristic impedance is also called single line impedance. As the name implies, the impedance of a single wire between control elements is usually 40ohm-60ohm, with 50ohm being the most common.

Differential impedance: the resistance interference between two adjacent signal lines in the same layer. The impedance value is usually 80ohm-120ohm, 90ohm and 100ohm are the most common.


Coplanar impedance: there is a corresponding influence between signal transmission and adjacent ground copper. The most common impedance value is 50 ohm.

The microstrip line is a stripped wire, which refers to the transmission line with only one side of the reference plane, the top and side are exposed to the air (or coated layer), which is located on the surface of Er circuit board with insulation constant, with power supply or ground plane as reference.

The stripline is a copper strip placed between two conductive planes. If the thickness and width of the line, the dielectric constant of the medium, and the distance between the two grounding planes are all controllable, the characteristic impedance of the line is also controllable, and the accuracy is within 10%.

1. The transmission delay time of a unit length microstrip line is only dependent on the dielectric constant and independent of the width or spacing of the line.
2. Because one side of the microstrip line is FR4 (or other dielectric) and the other side is air (low dielectric constant), the speed is very fast, which is conducive to the signal with high-speed requirements (such as differential line, usually high-speed signal, and strong anti-interference).
3. Both sides of the stripline have a power supply or bottom layer, so the impedance is easy to control, and the shielding is better, but the signal speed is slower.
4. Generally, under the same dielectric condition, the loss of microstrip is small (linewidth), and the loss of stripline is large (the line is thin, with vias).

(3)In the case of very high speed, extra layers can be added to isolate the signal layer, but it is not recommended to add more power layers to isolate, which may cause unnecessary noise interference.

(4)The typical design layer distribution is shown in the table below: 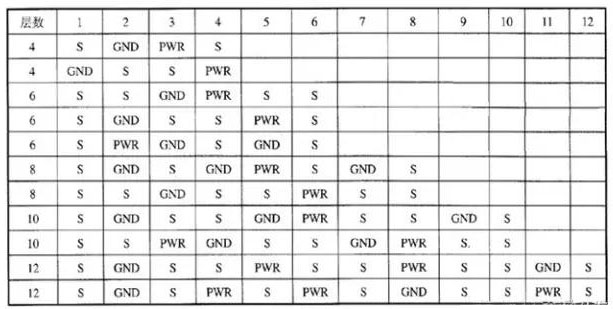 To control the impedance of PCB well, we should first understand the structure of PCB:

Generally speaking, the multilayer printed circuit board is composed of core board and semi curing sheets, which is laminated with each other. The core board is a kind of hardboard with specific thickness and two layers of copper, which is the basic material of the printed circuit board. While the semi-cured sheet forms the so-called wetting layer, which plays the role of bonding the core plate. Although it also has a certain initial thickness, its thickness will change during the pressing process.

The outermost layer of the multilayer PCB board is the solder mask layer, which is often called "green oil". Of course, it can also be yellow or other colors. Generally, the thickness of the solder mask layer is not easy to determine accurately. The area without copper foil on the surface is slightly thicker than the area with copper foil. However, due to the lack of the thickness of copper foil, the copper foil is still more prominent, which can be felt when we touch the surface of the PCB with our fingers.

When making PCB of a certain thickness, on the one hand, it is required to select the parameters of various materials reasonably, on the other hand, the final forming thickness of the semi-cured sheet will be smaller than the initial thickness. 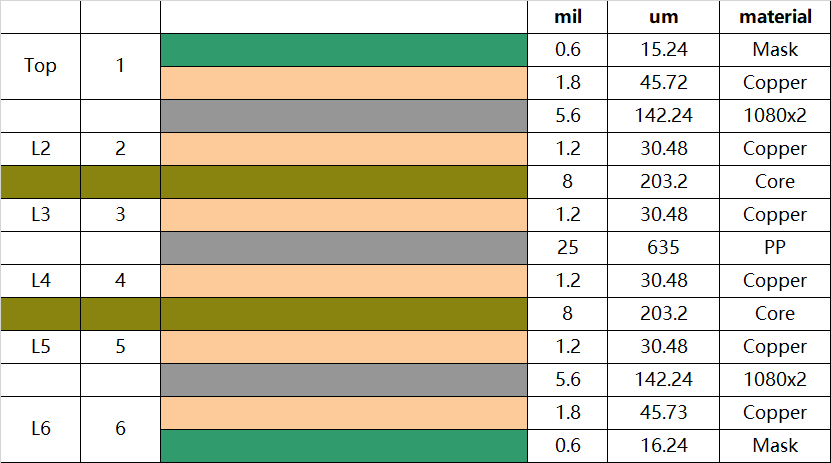 When we understand the structure of Multilayer PCB and master the required parameters, we can calculate the impedance through EDA software. You can use Allegro to calculate, or you can use polar's cits25, but here we recommend another tool, polarsi9000, which is a good tool for calculating characteristic impedance. Now many PCB factories are using this software.

When calculating the characteristic impedance of inner layer signal, whether it is a differential line or single terminal line, you will find that there is only a small gap between the calculation result of polar si9000 and Allegro, which is related to some details, such as the shape of the cross-section of the conductor. But if it is to calculate the characteristic impedance of surface signal, I suggest you choose the coated model instead of the surface model, because this kind of model considers the existence of solder mask, so the result will be more accurate.

Because the thickness of the resistance layer is not easy to control, according to our many years of production experience, an approximate method can be used: subtract a specific value from the calculated results of the surface model, and it is recommended to subtract 8 ohms from the differential impedance and 2 ohms from the single end impedance. 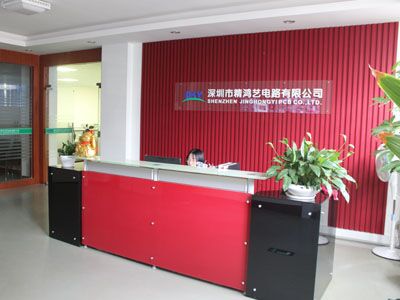 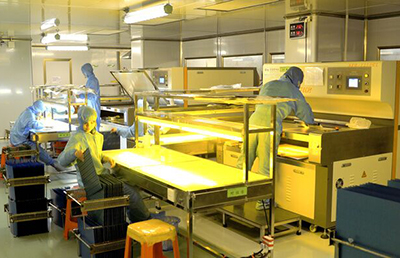 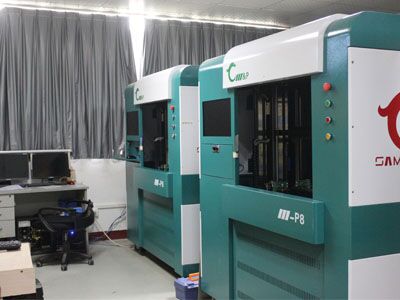 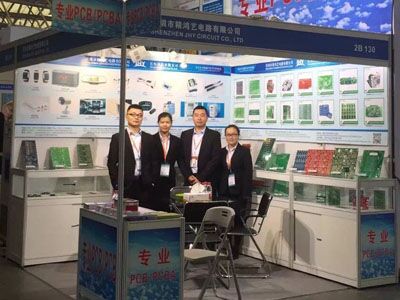 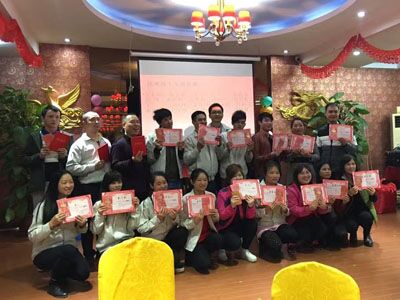